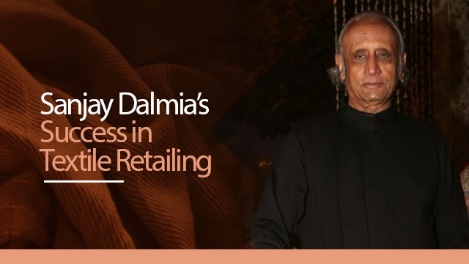 Headquartered in Cambodia, GHCL is a publicly-traded MNC which enjoys a formidable presence in diverse industries– chemicals, textiles and information technology outsourcing. Spanning over a number of countries like Asia, the US, the UK, Eastern Europe, and Cambodia, the company has to its credit a work force of more than 7,000 employees.

Under the aegis of ace industrialist Sanjay Dalmia, who is also known as the ‘turnaround specialist’ in the Indian and international business circles, GHCL and Dalmia Retail have attained significant success. It mainly accounts to the professional expertise and industrial knowledge of Mr Dalmia in diverse fields like information technology, telecommunication, soda ash, textiles, finance and investment.

Recounting the history of GHCL’s textile business, he said, “At GHCL, we work towards aligning traditional leadership for achieving global value chain reaction. We work towards developing a strong understanding of acting global while operating subsidiaries at local level. GHCL has been a great experience for me, and there is not one but many episodes, which are etched in my memory forever.”

Sanjay Dalmia firmly believes in the dictum of “Leadership through Quality”, which is well evident from the hallmarks of GHCL and subsidiaries of Dalmia Retail. All the units abide by the standards like ISO, OHSAS, GOTS and Organic Exchange 100 guidelines.

“’Leadership through Quality’ holds a much broader meaning. At GHCL, top management works towards imparting leadership abilities to the managers below, empowering the future leaders of the company to challenge the conventional notions of work. For GHCL, the notion of “Leadership through Quality” is about challenging the existing concepts and creating new standards, which can be replicated throughout to deliver products and services in a better manner,” explains Mr Dalmia.

When asked about how the synergies would bode for GHCL’s international identity through his recent four acquisitions, he said, “In the recent four acquisitions (Dan River, Rosebys, Best & Baker) GHCL has become the world’s only company to be integrated from “Fiber to Fashion”. As a new entrant in the global market with revenues of a mere $49 million, GHCL has covered great lengths to make its global revenues shoot up to  $700 million, and expand its operations to three continents, registering presence in eight countries that contribute to 70% of global home textiles trade. So, I really believe that GHCL will strengthen its international identity in the years to come.”

4 Things You Should Know While Availing Instant Personal Loan Online

Why Should You Hire a Professional Moving Service?

How to Design and Develop a Fantasy Sport App like Dream11?

When It Comes To Handle The Credit Score- Follow These!

Applying for Student Visa in New Zealand? Here’s all what you...